As part of the Blogger Program for the Web 2.0 Expo Europe, 25 bloggers from all over Europe were invited to sit down with Tim O’Reilly, Jennifer Pahlka and Brady Forrest. Lucky guy that I am I was part of this small group, enjoying an intense discussion, alas it was only about 50 minutes. I put down some notes, tweeted a lot more but up to now have got no time to put these into a blogpost. Well, until yet! 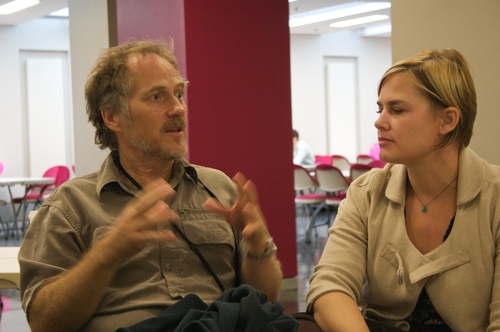 Andrea asked if O’Reilly are thinking of changing the name of the conference, shudder, is web 2.0 dead? Well, Tim sait that 2.0 is not a version name or number (“Everyone took it to be a version number. It wasn’t”). Web 2.0 is about the shift to the network as a platform, the network is penetrating our lifes, one reason why e.g. Google & Android ventured into the spectrum market and go “mobile”.

We’re in the business of building applictions for collective intelligence, we’re seeing a new class of applications (well, much like back then PC applications were a new category). Now were seeing applications that can only exist on a network platform, and that get better the more people use it.

Tim noted that they’re watching what alpha-geeks and hackers do much. Now they’re playing with sensors, hardware hacking, i.e. earthquake sensors that work with laptop motion sensors. Watching hackers and geeks provides kind of foresense of what is coming. What else is cool? Hackers are tinkering with 3D-Modelling, e.g. with Autodesk, starting with pictures then modelling.

On Enterprise 2.0 and corporate adoption, Jennifer said that 3/4 of participants are “Big Co.”, the Expo is devised as an event to deepen the connections between them and freelancers, startups, … This mix got to work together to see how these things can be used in the real world.

Tim noted that in light of the financial crisis, Enterprise 2.0 will gain importance. Let’s hope so, I guess he’s got a point here: lightweight social software can do a lot for efficiency and innovativeness, and thus remake old businesses (become more responsive, more agile, more flexible). Did I ever mention that it’s business model innovations we should be going after much more? He noted Walmart, that’s really infused with IT and is basically an IT organization (well, purchase triggers a lot in terms of related back-office processes). And there’s companies like Threadless, leveraging mass customization and wisdom of crowds. Jennifer added that it’s again how you define web 2.0, but it’s good for enterprise 2.0 anyway. Well, yes – tight money leads them the wiki et al. way. Smart companies will figure out the things that do work – like e.g. self-serviced communities, …

Lloyd Davis asked how we can enrich our offline relationships with the web, and the other way round. Brady answered that aka-aki is probably one example, giving you more interactions with people you know (and as Tim added also with people that you don’t know yet). In the beginning this may be accompanied with a loss of control, but later on we will learn on how to control access and connections of a diverse nature. Great experiences will likely follow …

Then someone had a question on the book publishing business, Tim said that it’s less central now, but there’s still potential to alert people to new things and to set trends, i.e. it’s about guiding things a little bit. But it’s no longer like the 90’s where „the web was built upon O’Reilly books“.

Now here’s the racy part, Nancy Williams asked about internet heretics and Tim was very outspoken, like „Andrew keen is a self-serving idiot. There is no substance in his book and he is flat out wrong.“ Yes, we’re having a community of experts that are having the debate, where some experts are more convincing and eloquent than others, but still the web is great for communities (of experts, too).

On how to convince “conservative companies” and corresponding CxOs. Here, Tim noted that history repeats itself: as with the PC, Linux, Twitter – this will happen again and again, but in the end it’s pretty much standard. Moreover he said that already a lot of smart CEOs are basically community managers, while he suspects that most PR firms never read the Cluetrain, and never got that it’s a conversation.

On the differences between the New York Expo and the Europe Expo – Tim said that they reflect and customize each event, i.e. NY is like that because there’s agencies and a lot of revenue focus, and thus not so much technology focus.

Berlinblase did some liveblogging here (as did Adam Tinworth who did the photo above, Lloyd Davis, and others I will link in time)

One Response to “Blogger roundtable with Tim O’Reilly at Web 2.0 Expo”