As with last year it’s a good idea to plan ahead for leveraging the Expo effect. So here’s my perpetual beta version of my planned workshops, talks and tracks. A much more elaborate version can be done by using the crowdvine calendar thing which allows for easy .ics-export too.

On Tuesday I am planning for the workshops by Leisa Reichelt, i.e. find me in Collaboration Techniques that Really Work – Productivity, Creativity and Consensus and Improving Your Site’s Usability – What Users Really Want.

Wednesday, first day of conference I will be in Better Media Plumbing for the Social Web by Stowe, Checking the “Feel” of Your UI with an Interaction Audit by Josh Damon Williams and Peter Stahl and probably in IBM: Web 2.0 Goes to Work by Gina Poole

Then from 2:15 pm to 3 pm it’s Leisa Reichelt, Suw Charman-Anderson and Ben Hammersley on the slate talking about TBD ;*)

Later that afternoon it’s Changing the World for the Better Using Web 2.0 by Alberto Nardelli, followed by Designing for Flow by Bruno Figueiredo

Thursday, it’s at least Thinking Outside the Inbox (again!) by my friend Luis Suarez, then Web 2.0 vs. the Water Cooler: How Web 2.0 Has Changed the Way We Collaborate by JP Rangaswami. But I need to drop by the Lunch 2.0 as well.

I will most likely jot down some notes on the actual talks in advance, come time. Said perpetual beta, didn’t I?

Some notes on the talks at the Enterprise 2.0 Forum. Kongressmedia put together a nice agenda and group of speakers. Check out some of the tagged and tracked tweets at Twemes. I and some others were microblogging too.

Suw Charman-Anderson started off the event, I can’t give a full report of her extensive talk, so just some tidbits. She offered sound advice (I am agreeing on all accounts, this is boring I know, but hey, I guess we’re just having “shared understanding”). And I really understand and value her effort to make things understandable, but not too easy at the same time.

Next up were Oliver Nitz and Rupert Petschina of Web Innovation Institute and Telekom Austria AG. They were presenting on the potentials of social software for making internal processes more effective. There was a nice metaphor and “storytelling hook” inside their presentation, i.e. the picture of a hen shed that reminded me too that I really need to blog about Lee Bryant’s “Free the Battery Humans” presentation at this year’s reboot and some thoughts I evolved since then.

Next up was JP Rangaswamy, again no full account of the talk, but some points. Suw did an extensive post (“Enterprise 2.0 Forum: JP Rangaswami“) on JP’s talk, extensive coverage and recommended. I guess typing on a whitey Mac goes a lot faster than on my dull PC box.

On organizational pathologies, JP showed a spy manual on how to interfere and disturb – and even when the audience was giggling we all know that these are timeless issues in corporations. What once was sabotage is now normal mode of work.

Then, it’s Alexander Warta from Bosch, talking about opportunities for corporate wikis and experiences at Bosch:

Perceived Challenges? He’s systematizing it into seven fields of tension:

BTW, I have asked Alexander to present these results and some of his experiences at the upcoming WikiWednesday Stuttgart. Come and join us if you’re close.

Next up, and last talk before lunch is by Matthias Büger of Deutsche Bank (I blogged about the pre-conference interview here: “Pre-Conference interview: dbWiki – building a Web 2.0 corporate knowledge base“) but he asked the audience not to tweet/blog/whatever his actual talk. OK, no problem. Now off to lunch and “networking d’enfer”

It’s Wednesday again which means that we’re up for another meeting with fellow wiki and Enterprise 2.0 enthusiasts at the MFG Innovation Agency for Baden-Württemberg.

This time’s activities and plans are freeform – which means that we can try out various styles and ideas. Still, I’ve got something on the slate, namely I might give a little presentation I did lately at the Intranetforum in Frankfurt and I might recap some learnings and experiences from reboot and the International Forum on Enterprise 2.0 in Varese.

But I would really appreciate it if we can get a more crowdsourced approach – i.e. if you want to present something, please feel free to share them.

And – bingo!- this morning I chatted with Joachim Niemeier and he turned me onto an alternative style and method of meeting: Speed Geeking. Funny name, indeed and probably an interesting approach to crunch more out of a wiki wednesday?

There are now a lot of open tabs in my browser – small wonder when researching, conferencing and preparing a new consulting gig. Let me try a rundown, no special order:

Nora Young of CBC Spark show posted audio from a full interview with Clay Shirky. The interview is worth hearing, and touches on some of the topics in his new book (Here Comes Everybody, see also here and here) – such as the pros and cons of social media, new business models online, and how big change comes from human motivation, not shiny new technologies. Download the mp3.

Nora and Clay started off by talking about our “cognitive surplus,” which Clay describes as “all the free thinking time that society has access to… in the brains of its citizens that isn’t getting used for specific tasks.” Think TV watching time, except Clay has some ideas on how you should be/could be spending your surplus.

There’s a (german language) issue of UNESCO Heute on the web society and its understanding and emergent uses of knowledge, this is a rather heterogenous beast, a compilation of small articles:

Then here’s a study by the Economist Intelligence Unit about collaboration.

Corporations all over the world are making tremendous investments in technology, from servers, to storage, and network. Although technology is used on a day-to-day basis (think about the Voice over Internet Protocol (VoIP) deployments) to enhance productivity and to curb costs, it seems that collaboration is still best performed face-to-face. The study provides a glimpse into the reason: trust.

Jay Cross too has some hints for online collaboration (pdf). Dion Hinchcliffe is explaining where the conversation is going (“Endless Conversation: The Unfolding Saga of Blogs, Twitter, Friendfeed, and Social Sites“), including Twitter and Friendfeed uses for business. And Michael Krigsman analyzes power politics and pitfalls in Enterprise 2.0 adoption. Yes, we need to understand the corporate context to make this work, this is true especially when dealing with middle management. Now, getting out there and trying it is an option, it’s “show and tell” – indeed, in my experience upper management gets it rather easily. Still I somehow like this cartoon by geek and poke. Better beware this situation …

And finally check out Ross Mayfields slides of his keynote at Van Web 2.0 naar Enterprise 2.0 in the Netherlands:

I wasn’t there, nor at the Intranet Summit 2008 (Saim Alkan has a german language summary). I’ve been at the Intranet.days (meeting Saim and others) and will be here at the International Forum on Enterprise 2.0 in Varese and have some rebooting too.

– tools (I would include methods as well here)
– interface and ease of use (yes, usability has some merits and plays an essential role for adoption)
– sociality
– encouraging use

Hmm, the model can serve as a good starting point, even when – as Paula Thornton observes in the comments – placing tools so prominently feels awkward. 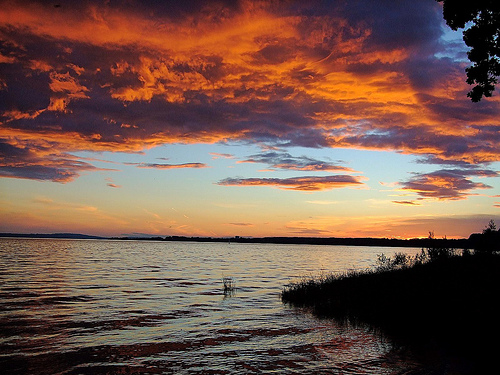