Why do some teams fail to use their members’ knowledge effectively, even after they have correctly identified each other’s expertise? This paper identifies performance pressure as a critical barrier to effective knowledge utilization. Performance pressure creates threat rigidity effects in teams, meaning that they default to using the expertise of high-status members while becoming less effective at using team members with deep client knowledge. Using a multimethod field study across two professional service firms to refine and test the proposed model, I  lso find that only the use of client-specific expertise (not the expertise of high-status members) enhances client-rated performance. This paper thus reveals a paradox affecting teams’ use of members’ knowledge: the more important the project, the less effective the team. This paper contributes to the emerging literature linking team-level expertise utilization (instead of just recognition) with performance outcomes and also adds a novel, team-level perspective to the literature on inter-firm relations.

This is close to being an organizational collaboration pathology – huh? Now, it’s clear that having some slack time to build up social capital is essential (for building up trust and more – we’re talking of forming, norming, storming phases in teams) while in reality teams don’t always get that time (it’s a fast-paced multi-project world after all).

But putting on the heat on teams with an overblown performance focus seems to aggravate effects we know by the name of group think (and the related fall-back to well-established patterns when the going gets rough). And group norms kill creativity:

Unfortunately groups only rarely foment great ideas because people in them are powerfully shaped by group norms: the unwritten rules which describe how individuals in a group ‘are’ and how they ‘ought’ to behave. Norms influence what people believe is right and wrong just as surely as real laws, but with none of the permanence or transparency of written regulations…the unwritten rules of the group, therefore, determined what its members considered creative. In effect groups had redefined creativity as conformity.

Now what role may social software play in this situation? I agree that just mimicking Xing or LinkedIn in the hope of supporting and facilitation intra-company knowledge networks is bound to fail (and more, it’s following a flawed paradigm, social networks in companies should be understood as emergent properties of this complex social system we call organization). Designing the knowledge environments (and tools) for smart and action-oriented workers tasked with creative jobs is not easy (and very dependent of actual context too), letting the connections between interdependent teams simply emerge is a challenge. Just think of the various relations we entertain to people not in our actual company network (freelancers, alumni, competitors and complementors, partners, …), these are complex systems too: 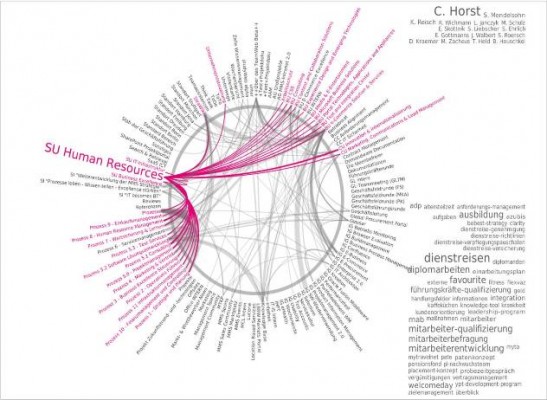